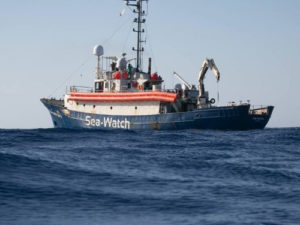 This week, our Italian member Diaconia Valdese committed to hosting the Sea Watch migrants quota taken in by the Italian authorities. The migrants will be hosted in different Diaconia Valdese’s community centres at its own expense, and all the cost will be funded by the 8/1000 tax allocation of the Waldensian Church.

The 49 migrants, stranded at sea aboard the Sea Watch and Sea Eye rescue boats after being refused entry to any European port in late December, were finally allowed to land in Malta on Wednesday. Italy is one of eight European countries that have agreed to take in people.

Giovanni Comba, President of Diaconia Valdese stated “We are glad that this story has come to an end. We committed to welcoming these people, as we have already done with hundreds of other migrants through the Humanitarian Corridors. We are now waiting for the Italian authorities to give us more details to be ready to host these migrants and respond to their needs in the best way. We are grateful to the Italians who have supported us over the years and continue to do so.”

In 2016, the Federation of Protestant Churches in Italy, together with the Waldensian Church and the Roman Catholic Comunità di Sant’Egidio decided to launch an ecumenical initiative named Corridoi Umanitari (Humanitarian Corridors). This project has already safely brought more than 1000 people to Italy, in particular from migrant camps in Lebanon, many of them Syrians in conditions of extreme fragility. The Diaconia Valdese, the part of the Waldensian Church which has the task of managing more structured projects in the diaconal area, has been busy organizing accommodation for these people throughout Italy, generally in small groups housed in apartments.