Weekly editorial of our Secretary General: Solidarity and service 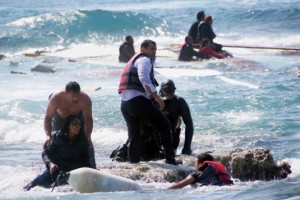 As we all return to work and life gets back into a routine, I am sure we are all left with various memories of the summer holidays. For many of us, it will be memories of the increasing number of refugees, asylum seekers and migrants entering Europe in ways that are representative of their desperation but also threatening to their lives. Finding safe ways to enter Europe has to be a priority for European leaders in the coming days and weeks. The situation as it is cannot continue and it is no use trying to ignore the fact that people are coming to Europe. In the coming week, we will be working with our Ecumenical partners to launch a contribution to the debate on migration and asylum policy in Europe, particularly in light of the upcoming meeting of Justice and Home Affairs ministers across the EU. But although there is much focus on the EU right now, we know that migrants and refugees are also in non-EU countries – whether it be ethnic Armenian Syrians going to Armenia or people travelling through Balkan countries such as Serbia on their route to enter the Schengen area.

Eurodiaconia members in the pressured countries are undertaking actions to provide support to migrants, refugees and asylum seekers. In Greece, France, Serbia, Hungary and Italy diaconal organisations are meeting basic needs, providing counselling and looking at how to provide longer term support.

This week Donald Tusk, President of the European Council, made a statement on the situation where he references some of the comments that have been made recently about Christianity and migration:

(…) “I want to underline that for me, Christianity in public and social life carries a duty to our brothers in need. Referring to Christianity in a public debate on migration must mean in the first place the readiness to show solidarity and sacrifice. For a Christian it shouldn’t matter what race, religion and nationality the person in need represents.”