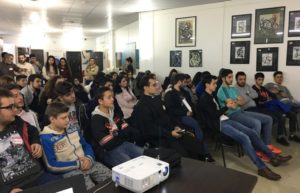 At the end of March, our member WCC Armenian Round Table Foundation (ART) along with Aleppo Compatriotic Charitable Organization launched its new joint project: “Better Future for Syrian-Armenian Youth” in the presence of more than 60 Syrian-Armenian youth representatives.

The new project aims to empower Syrian-Armenian youth, who escaped the ongoing conflict in Syria and settled in Armenia, through training and capacity building activities. The project also aims to facilitate the deepening of relations between Syrian and local Armenian youth through joint activities.

Rubina Devrikyan, Project Officer at WCC Armenian Round Table Foundation, introduced the goals of the project and added that “Better Future for Syrian-Armenian Youth will not only include trainings and seminars but also small scholarships, pilgrimages and camps for Syrian-Armenian students, fellows, and interns in need. Moreover, they will also have an opportunity to have joint activities with local Armenian youth to facilitate integration.”