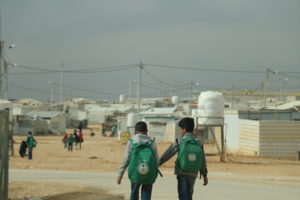 Our Czech member Diaconia ECCB, in cooperation with the Czech Government and the Lutheran World Federation (LWF) has recently built a community center complex from several cells in the Syrian refugees camp of Zaatari in Jourdan.

With its 80,000 inhabitants, Zaatari is today one of the biggest refugees camps in the world. After 5 years, the main campus offers almost everything: two official supermarkets, a wedding salon, a mobile phone or Apple computers store, and all other sorts of things. One can trade both for money and for goods.

The camp residents do not have to fight for survival. Gone are the days when they only lived in tents, which did not protect them from the desert storms or from the cold, and people were glad to have anything to eat. Today, a sewerage system is being built, the camp has been electrified for a long time (the Czech government also played a major role in this in 2015). The greatest risk for its inhabitants is lurking elsewhere – above all in idleness. There’s nothing to fill your time there.

This is the reason why Diaconia ECCB has been running the project Peace Oasis community center. The center includes sewing classes and courses in informatics. There are also a playroom for children and an outdoor playground where football can be played. However, it is becoming more and more important that people are allowed to talk openly about their pain, worries and hopes. A well-trained support guide is also provided.

According to Adam Šůra, Communications Officer at Diaconia ECCB: “There is often a theme of violence against young mothers and girls, which they experienced during their escape. Children and young people in the camp conditions also need to be able to confide in somebody about their worries and their uncertain future. This kind of support can help prevent both conflicts and radicalization.”

Not far from Peace Oasis, there is still a piece of free land. Diaconia ECCB, together with the Czech Embassy, plans to expand the meeting facilities in that small part of Jordan – to create a library and a community café.

The Czech Embassy will contribute some of the funds, and Diaconia ECCB would like to fund the extension from the donations of the Lent collection.

To find more about our member’s work in Jourdan, check the project resume.