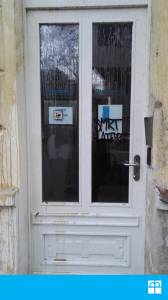 At the end of April , the Prague headquarters of our member Diaconia ECCB was targeted by people who don’t support the hatefree movement and have stained their building with words of hate.

Eurodiaconia is deeply alarmed by the rise of radicalism, violent attacks and intolerance across Europe. We strongly condemn behaviour, along with all other forms of hatred, intolerance, and violence. Such actions are designed to attack the work of many, including our members, such as Diaconia ECCB, who work for social inclusion and integration. In this, we extend our solidarity to our Czech member who have made clear they will not be restrained in their aim to remain a safe and open place for all.

26 April 2016, Prague. The Prague residence of the Diaconia of Evangelic Church of Czech Brethren has suffered together with other venues in Prague an attack of vandalism.

Apart from other venues in Prague, Diaconia ECCB has also been an object of an organised assault. Except of other demonstrations of vandalism, those have both defaced and blackmailed the main entrance of Prague headquarters with ‘’DEATH HATEFREE“ scribbles.

We perceive the events from last weekend in Prague as extraordinarily alarming. The organisers‘ target with such ‘’protests“ is undoubtedly to raise fear going viral and to menace those who had decided to support hatefree environment and equal approach towards the others. Diaconia ECCB will not step aside from their attitudes and will continue fulfilling their mission, i.e. helping all people regardless of race, sexual orientation, religion or their world opinion.

‘’We will not let us intimidated. The Diaconia has been, is and will be an open and safe place for all regardlessly. Even by reason that our work is based on Christian principles. Hatred is no a solution,“ says Petr Haška, director of the Diaconia ECCB.

‘’Supposed we are self-confident enough, we don’t need to mark the space where others are sharing fair approach to every human being“. Jan Dus, director of the Centre of Relief and Development, comments the attack.

All venues or institutions having been damaged, are united in so called Hate Free Zone – hatefree or gentle places declaring their fair approach towards each and every human being. The Czech Diaconia is and will also be a part of these sites.