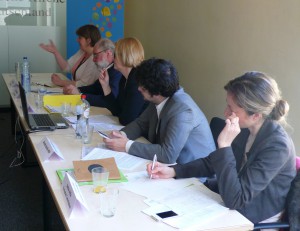 On 20 April, Eurodiaconia held a breakfast meeting to discuss the challenges faced by long-term unemployed persons and the potential role of EU policy makers and services providers in addressing them.

The meeting brought together civil society organizations, key political actors and social partners in an effort to boost the implementation of last December’s Council recommendation on the integration of the long-term unemployed into the labour market and explore its way ahead.

The meeting, which sparked a fruitful debate, had two parts. After an introduction by Secretary-General Heather Roy to Eurodiaconia members’ initiatives on work inclusion, the debate looked at the policy dimension of long-term unemployment (LTU). MEPs Agnieszka Kozłowska-Rajewicz (EPP) and Brando Benifei (S&D) stressed the emergency of unemployment in the EU. The idea was shared by Anita Vella from DG Employment, who presented forthcoming action against LTU by the European Commission. Ole Meldgaard, from Eurodiaconia member Kofoeds Skole, illustrated the holistic approach offered to work and social inclusion at his organisation

In a second panel, Ben Egan from ETUC, Robert Plummer (BUSINESSEUROPE) and Giorgio Zecca (EUROCITIES) discussed the views of social partners and local authorities on the fight against unemployment. Their contributions showed substantial agreement on the needs faced by long-term unemployed persons and acknowledged the pivotal role of social service providers in this endeavour.

For more information on this topic, see Eurodiaconia’s response to the European Commission’s proposal for a Council recommendation on the integration of the long-term unemployed into the labour market.