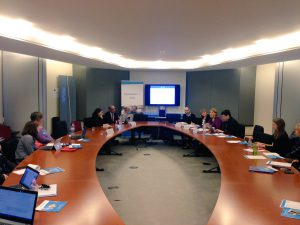 On 5th December 2017, Eurodiaconia held an event in the European Parliament, on ‘the role of social inclusion in preventing radicalisation’, hosted by MEP Ms Sabine Verheyen of the European People’s Party (EPP). The aim of the event was to showcase projects from within the Eurodiaconia network working on the topic of radicalisation prevention, and to gather responses from representatives from the European Parliament and European Commission on initiatives and instruments at Institutional level to tackle discrimination and intolerance. The event heard from Eurodiaconia members from Svenska Kyrkan (Church of Sweden) and Diakonie Deutschland (Diaconia Germany), on their recent projects on combatting radicalisation through social inclusion initiatives at local level.

To follow, MEP Sabine Verheyen and MEP Dennis de Jong gave statements on the topic of radicalisation, touching topics including the rise of the internet in propagating violent and extreme views, and the increased loneliness in society that can push individuals to gain seek a feeling of belonging or community as part of radical groups. Participants also heard from representatives from the European Commission Directorate General for Employment, Social Affairs and Inclusion, and for Regional and Urban Policy. To hear about the full extent of discussions and interventions, please read our event report.