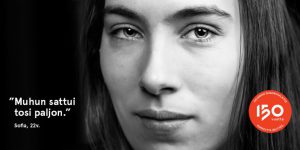 Our member in Finland, the Helsinki Deaconess Institute (Helsingin Diakonissalaitos), has launched its Christmas campaign which calls to stop the marginalization of young people.

The campaign, which aims to stop the exclusion of young people, was launched on 27 November. When Finland celebrates its 100th anniversary, tens of thousands of young people live without faith in the country’s future. HDI estimates that up to 69,000 young people have already been excluded from school and work and are in great danger of being marginalized.

“If a young person is outside of work and training for a long time, the problems accumulate and the risk of marginalization increases. The bigger the problems are, the harder they are to deal with, “says Sari Nyberg, the service area director of the Juha youth service of the Helsinki Deaconess Institute .

The campaign’s has put out a video that tells a story of a young woman, Sophia, who has been helped by a Deaconess Institute in Helsinki. 22-year-old Sofia struggled in school due to learning disabilities,  which caused a severe knock to her self-esteem and mental health and put her at risk of being marginalized. Sofia was ultimately led to the HDI, where she received direct support and care to help improve her daily life. The aim is to find Sofia and other young people the path to study or work.

Through the campaign HDI is emphasizing its work with young people and the services it provides to strengthen the resources and support young people to engage in education or work. Our member helps young people build and implement a future plan and find the services they need. Their activities are voluntary and free of charge for young people, they can also benefit from coaching and personal support from HDI staff, or larger support groups.

The exclusion of young people has attracted a lot of public debate. It touches almost everyone. Through their Christmas campaign, which has received further support and visibility from Finnish music group Kuumaan, the Helsinki Deaconess Institute and its ambassadors remind that helping each other is a task for everybody.

You can participate in a Christmas campaign by making a Christmas donation to stop the exclusion of young people on the HDI campaign website.

You can learn more about HDI’s work with young people, including within their Vamos project supporting young people across Finland, by visiting their website.