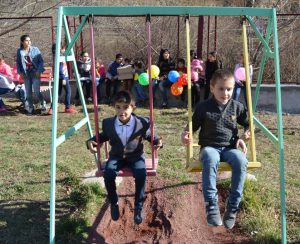 Our member in Armenia, the Armenian Round Table Foundation, has been celebrating the fruits of a three year collaborative project with other Armenian NGOs to rebuilt the Martuni community in the Gegharkunik Region of Armenia.

In 2014, a year before 100 year anniversary of the Armenian Genocide, eight non-governmental organizations known for their long-term contribution and honest reputation initiated a three-year joint project aimed at rebuilding Martuni community. During the three-year rural development program, our member the Armenia Round Table Foundation, along with the Armenian Missionary Association of America, “Shen” Charitable NGO, Children of Armenia Fund, Development Principles NGO, World Vision Armenia and Teach for Armenia have invested a total of 79 million drams.

Since 2014, within the framework of joint program there have been multiple improvements made in Martuni village in the social, economic, infrastructural, cultural, educational, health and environmental spheres. The village of Martuni is a symbolic choice, as its first inhabitants after its founding in 1921 were survivors of  the Armenian Genocide, mostly coming from Van, Alashkert, Kars and Sasoun.

On November 16th, 2017, representatives of member organizations and their partners paid a visit to Martuni to assess the progress made in the project. The consortium held a press conference where organization representatives highlighted the efforts and resources created by the cooperation of such a strong joint initiative. Arthur Asatryan, the Mayor of Martuni Village said that due to the support of the organizations residents are holding hope that the village will develop and new values will be created.

As a result of cooperation a renovated kindergarten, school cafeteria and dentists surgery were officially launched after the observational visit to the sponsored programs in the community.

You can learn more about the investment and rebuilding of the Martuni village on the Armenia Round Table Foundation website.