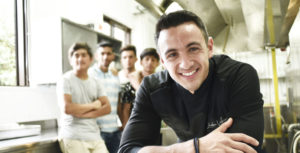 For the occasion, MasterChef Greece winner Lambros Vakiaros shared his cooking secrets and techniques with the children hosted in the camp. Together with some young refugees from Syria, Afghanistan and Pakistan, he created a special recipe combining Greek and Middle Eastern cuisine and served it to the other refugeees hosted in the camp.

“Food unites us more than anything else – said Mr. Vakiaros – because it is all about love: you prepare it with love to serve and to thank for it. I like to help unaccompanied refugee children: they have energy in them and a lot to give.”

At its camps “Mission”and “Estia”, our member Apostoli witnesses every day the courage, patience and perseverance of unaccompanied refugee children. “Let us consider the fate of millions of people, especially children who have no way back: let’s not forget that we represent for them a living hope” underlined the Apostoli General Director Konstantinos Dimtsas.