Eurodiaconia debates on skills for social Inclusion at the European Parliament 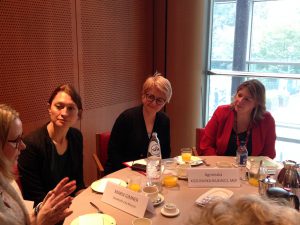 On 11th October, Eurodiaconia held a cross-party breakfast meeting at the European Parliament hosted by the Polish MEP Agnieszka Kozlowska-Rajewicz (EPP) and with the participation of MEP Emilian Pavel (S&D) and MEP Jean Lambert (Greens/EFA). The event aimed to promote an inclusive approach to employment through a dialogue with EU policy-makers and institutions. Special emphasis was made on the potential of social enterprise as a bridge between skilling interventions and sustainable work inclusion, as shown by Eurodiaconia member the Stockholm City Mission, represented by Maria Gimner.
Risto Raivio, from the Job Creation unit at DG Employment, acknowledged the potential for inclusiveness within social enterprise and took stock of the latest initiatives aimed at boosting the inclusive component of the social economy.

Several Members of the European Parliament, European Commission officials and representatives of European civil society organizations engaged in the subsequent discussion and highlighted the multi-faceted dimension of skills. Eurodiaconia member organizations have a long experience in the provision of work integration and social inclusion services, in particular for people with higher risks of social exclusion such as (long-term) unemployed persons, young people, migrants, persons with disabilities or persons with mental health issues, among others.

For this reason, Eurodiaconia has been following closely the last EU initiatives on the integration of the long-term unemployed. In this regard, Eurodiaconia already emphasized the need to link work and social inclusion efforts in its response to the European Commission’s proposal for a Council recommendation on the integration of the long-term unemployed into the labour market, followed up with a debate with MEPs and other policy-makers. This year, our work around employment and social inclusion is focused on the key role played by skills in the inclusion of a wide range of user groups, in line with the launch of a New Skills Agenda for Europe in June 2016 and to which Eurodiaconia also responded.

To learn more on our breakfast meeting at the European Parliament, please read our meeting report.