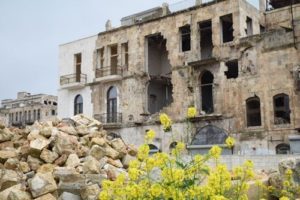 Last March, a delegation from our Hungarian member The Reformed Church in Hungary paid a visit to the Evangelical churches of Lebanon and Syria, signing a memorandum of commitment.

Since the outbreak of war in 2010, The Reformed Church in Hungary has been playing an important role in supporting the Presbyterian community of the Middle East, which suffers from severe discrimination on the basis of two grounds at the same time.

The memorandum of commitment is an important step forward jointly released by the Hungarian Reformed Churches and the Evangelical Arab and Armenian churches to reaffirm their strong spiritual community and their commitment to cooperate.

Churches in Lebanon and Syria have also received generous support from the Hungarian government. Thanks to this donation, the Arab-speaking Church is planning to build a new church centre and a school in Aleppo to replace the old ones, which have been completely destroyed. The Armenian Evangelical community is already using this financial support to modernise its schools and health facilities in Damascus and Aleppo, which were also bombed during the war.

To know more about the memorandum of commitment, check our member’s website.