Weekly editorial: The meaning of freedom in modern society 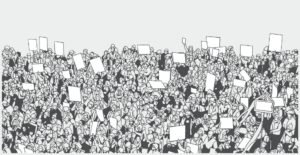 Yesterday, the 25th of April, we celebrated in Italy the Liberation Day (Festa della Liberazione). The anniversary celebrates the end of the fascist regime and the end of the Nazi occupation of Italy in 1945.

As every year, the celebration of the sacrifice and death of hundreds of partisans opposing the Italian dictatorship was marred by sterile polemics between rival factions. For some people, who have never experienced what living in a dictatorship feels like, there is not much to celebrate either because they regret the Fascist regime or because they see the liberation process in Italy as a sort of a civil war.

I am, by nature, a pragmatic person who abhors conformity, and political correctness, and tries to evaluate the various aspects of reality. I am perfectly aware of the fact that some brigades of the liberation movement were responsible for summary executions. The pictures of the bodies of the old dictator and his partner insulted, physically abused, and hung upside down in Milan, represent one of the darkest times in Italian history. However, also those horrible facts should make us understand the intrinsic worth of this anniversary, which goes beyond Fascism and partisans, and celebrates freedom and the rule of law in their different forms.

In Italy, we don’t celebrate a generic “End of the War National Day” as it is in other countries but the liberation from violence, injustice, abuse, and fear. This is why it is so important for all of us, to take the 25th of April Anniversary not only as an opportunity to acknowledge the sacrifice of those who have fought to free Europe but also to reflect on the meaning of freedom in our society.

As Europeans, we know very well the monsters which might result from the sleep of reason. We do know how far human beings can go when they are blinded by extremism and violence, and how fragile democracy can be.

Today, more than ever, the freedom we have struggled so hard to achieve in Europe is under threat. New enemies of democracy have been added to the old ones. Over the last years, a new wave of religious fanaticism has risen in our society. Like political extremists, those people hate freedom in all its forms and aim at imposing their view through violence and fear. The 25th of April reminds us that we also must stand united against those who want Europe to plunge into dark ages again.

Our members’ projects on anti-radicalisation prove to us that social inclusion is the most effective tool to fight religious and political radicalisation and to preserve our freedom. Investing in people’s wellbeing, and lifting the most deprived out of poverty is not only convenient from an economic perspective but it is also indispensable to maintain social peace and the rule of law.

From our side, we will keep advocating for a social Europe, in which everyone has the same opportunities to express him/herself in the certainty that the liberation from violence and fear also passes through a fairer society.

Have a nice weekend,
Antonio