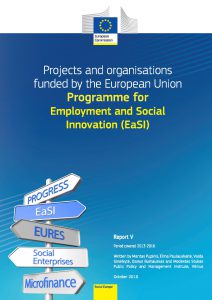 The European Commission published its fifth monitoring report in which it reviewed activities implemented by 19 EU-level organisations in 2015 funded under the EU’s Programme for Employment and Social Innovation (EaSI) and 30 projects supported by its predecessor programmes PROGRESS and EURES (2013-2016).

This time the focus was not only on potential good practices, but also on the European added value. The report also praised “Eurodiaconia and its members, which became increasingly engaged due to the various capacity-building activities and tools. Eurodiaconia and its members continued as partners in alliances at European level that further the reduction of poverty, inequality, social exclusion and unemployment and support the participation of their members in similar alliances.”

This report will serve as guidance for

wishing to apply for EU funding and it will provide policy-makers with ideas for further policy developments.

To learn more on Eurodiaconia’s and other organisation’s work presented, check out the full report (EN).