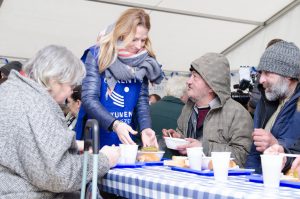 Our Hungarian member Magyar Ökumenikus Segélyszervezet (Hungarian Interchurch Aid) has this week announced the grand total of 650,000€ for its fundraising and donations activities carried out before Christmas.

The campaign’s principal aim was to raise funds in Hungary to provide material assistance and shelter to poor families and the homeless, as well as raising awareness for the cause and promoting solidarity. Recognition and thanks was also given to the contribution of volunteers who participated in the fundraising.

Fundraising was carried out through multiples initiatives, such as a dedicated donations phone line where people could call to offer money to the cause. In fact, the campaign was so successful that Hungarian TV channel RTL Klub dedicated an hour of their programme to the cause, giving further visibility and support to the campaign, and its aims to raise awareness of poverty and homelessness, and promote social solidarity.

Together with TESCO Hungary, Magyar Ökumenikus Segélyszervezet raised over 73 million forints, equivalent to approximately 237,000 Euros, by developing a coupon system whereby shoppers could purchase coupons whilst doing their groceries that would go directly to the cause.

Ökumenikus Segélyszervezet continues to uphold its objectives of promoting social solidarity and deepening a sense of belonging to the community. The work of our Hungarian member goes further than providing aid at a national level, and the money raised will be used to support not only those in Hungary, but in neighboring countries in the region.