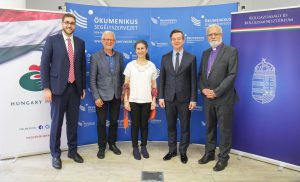 Our member in Hungary, Hungarian Interchurch Aid (Ökumenikus Segélyszervezet) has increased its aid program in Iraq by opening a center to help returnees near Mosul, and support internally displaced persons in Erbil.

The Hungarian Interchurch Aid is launching a large-scale two-year humanitarian and development program in Iraq with the support of the Hungarian government. The Hungarian organisation, which has been providing its aid program since 2014, primarily aims to support families returning to the Mosul region through reconstruction efforts and to scale up its humanitarian program supporting internally displaced persons. The details were reported in a press conference held at the organisation’s Headquarter and National Coordination and Volunteering Centre on 19th October 2017.

Mr László Lehel, President-Director of HIA introduced the program, highlighting the work the organisation has done in its projects from 2014 to provide humanitarian assistance to IDPs (Internally Displaced Persons) in Iraq and also Syrian refugees. In June 2016, HIA opened its permanent Humanitarian Centre in Erbil with the financial support of the Ministry of Foreign Affairs and Trade of Hungary. The Humanitarian Centre does not only function as the centre of HIA’s humanitarian actions in the region, but also serves as a headquarter for other international organisations working in the region. It also fulfils the coordinating tasks of the international ACT Alliance. Mr Lehel added that HIA launched the significant two-year aid program with a HUF 500 million contribution (equivalent to 1.6 million EUR) of the Hungarian Government, which focuses on supporting returning families to resettle and improve their lives at home.

HIA’s programme will reach at least 2000 people per region in the next two years. In order to achieve the aims of the Iraqi aid program, close cooperation is needed with Hungarian Interchurch Aid and its local partner organizations, local authorities supporting refugees, and local and international NGOs such as Act Alliance, the Duhok-based Christian Aid Program Iraq (CAPNI) and the Sulaymaniyah-based Rehabilitation, Education And Community Health (REACH).

More information on the HIA work in Iraq and its aid program can be found on the website.