Moving to Ukraine to help children in need: An interview with Nicole Borisuk, Living Hope Director 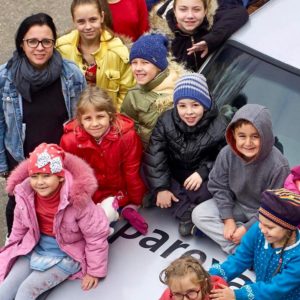 On the occasion of Children’s Day, we interviewed Nicole Borisuk, Director of our Ukrainian member Living Hope about her choice to move to Ukraine and found an NGO working with children.

Living Hope was founded in 1999 in Odessa. What was the social and economic situation of Ukraine at that time and why did you decide to work with children in particular?

When I moved to Ukraine in 1996 the country was in a chaotic situation. As results of the transition process since the break-up of the communist system, many Ukrainian children were either abandoned at birth, living with a single parent or grandparent, or born into a poor family with fewer opportunities than their peers.

Many children in low-income families suffered the effects of malnutrition and poor access to primary health care. With such a starting point in life, many of them did very bad at school or dropped out of the education system. Many kids were living on the streets. Even if they did attend classes, the knowledge they gained was insufficient. That was one of the reasons for the alarming number of teenage pregnancies, abortions, and infections, including sexually transmitted diseases and HIV. In addition to that, Ukraine had (and still has) one of the world’s highest levels of alcohol consumption among children and young people. According to the research undertaken by the European School Survey Project on Alcohol and Other Drugs published in 2009, 70% of Ukrainian children receive their first drink of alcohol from their parents. Another serious issue in Ukraine is domestic violence. The United Nations Development Programme reports that 30% of the Ukrainian population is subject to violence during childhood. A common cause of this problem is severe financial difficulties in families, which lead to other problems such as the breakdown of communication or parents engaging in unsafe and/or illegal activities. The number of after-school programs for this group of excluded young people was very limited. In fact, Living Hope was the first NGO starting such a program in Odessa. We chose to work with excluded families and children because we are convinced that children have a special place in God’s heart and that every child deserves getting opportunities. Therefore, as a response to the negative situation, we were facing, my Ukrainian husband and I founded the first Living Hope day care center in a disadvantaged neighborhood in the city of Odessa.

What was the perception of locals towards NGOs and your work in particular at the beginning? How did that change over the last 20 years?

The preventive approach to working with excluded children and their families was a rather new concept in the early 2000s. We did not even have social pedagogy studies at university in Ukraine and the social worker profession was unknown.

I had just finished my social work studies in Germany, and of course, we faced lots of prejudices towards our work during the first years of activity. Many people were suspicious because the services at the daycare centers were given for free and they could not understand why someone should care for children from poor and dysfunctional families. But after some years of consistent work, our team could see the first fruits of our ministry. While growing our day care centers, many young people chose to take the opportunities they were offered, and successfully finished school, started further education, joined international voluntary programs.

Over the years, the tangible number of children whose life has changed also change the perceptions of national authorities and locals towards our organisation. Now, we benefit from a fruitful cooperation and we are seen as a partner in tackling poverty and social exclusion.

Over the last 20 years, Living Hope has been putting into practice a holistic approach aiming at supporting children and their families. How does that work in practice? (focus on working with children but also with their families)

As a first step in developing a strategy for overcoming social exclusion, our social workers and volunteers always try to analyze and understand the family and child’s situation in their social–ecological systems. It is considered important to take into account all the forces and structures the child has to contend with, such as peers, school, neighborhood etc. rather than simply deal with children and families. In order to develop a strategy to overcome exclusion, it is necessary to see the whole context in which a child is growing up. In some cases, our social workers would sit together with the child, young person or the family, and draw a picture of all the forces that play a role in the child’s life and try to understand how those interact with each other. We found this tool particularly helpful in gaining an understanding of the whole child’s situation and also in developing a strategy to make changes at different levels of life.

On the occasion of Children’s Day, what do you hope for Ukraine to ensure that children are protected from poverty and can enjoy equal opportunities?

Ukraine is still facing multiple challenges. The conflict in Eastern Ukrainian has added even more humanitarian needs to the already precarious situation of children in the country. Despite all the international treaties on the protection of children’s rights signed by Ukraine and implementation of international best practices in some parts of the country the rights of many excluded children are violated on a daily basis. The problems they face in their everyday lives seem to grow faster than the national response. Nevertheless, Living Hope is committed to continuing its work in this field, in the belief that changing one life at a time will finally make a difference for the whole community.