A call against poverty at the European Parliament 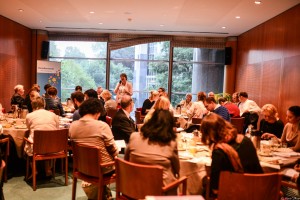 MEPs presented and stressed the different angles of poverty, with specific reference to youth unemployment, child poverty, financial exclusion and the refugee crisis. In this context, the vulnerability of refugees and migrants was mentioned in particular, starting with the fact that they cannot open a bank account in most of EU countries and thus find themselves excluded, for instance, from access to telephone cards and housing. Furthermore, attention was drawn to the unacceptably high number of Europeans suffering from poverty: one in 4 persons in the European Union is at risk of poverty right now. To link the two subjects, one of the MEPs and our Secretary General Heather Roy stated that the current immigration and refugee crisis in Europe reveals the fissures in the fabric of our solidarity systems and the need to review and improve all social infrastructures dealing with vulnerable people, regardless of their nationality. Capacities have to be increased, but above all, new policies are needed to put an end to rising poverty, social exclusion and administrative barriers.

As a conclusion, all participants agreed that the social dimension has to be central to EU policy developments, and not at the margins as it is currently the case. One clear example of this would be the European Semester, which is focusing more and more on economic criteria and alarmingly losing its focus on achievements related to Member States’ social policies. To curb this trend, MEPs in attendance emphasised that the European Parliament should further oversee and push for the mainstreaming of social considerations within all EU policy developments. They committed to devote particular effort to current work on minimum income and social protection floors at the EU level.

It was also encouraging to hear that MEPs acknowledged the important role of NGOs such as Eurodiaconia and its members in supporting and implementing this vision, fostering hope for continued and close cooperation in the future.

Have a good week-end,
Eurodiaconia’s secretariat