Weekly editorial: “A planet in all our hands” 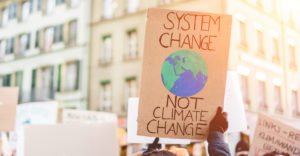 Last Friday, I had the opportunity to participate in one of the global climate strikes that saw more than fifteen thousand people protest for climate justice in the streets of Brussels. The call to politicians and decision-makers to take urgent action against climate change and recognise that we face a “climate emergency” has made the headlines in the past months. And with good reasons. The effects of a rapidly warming atmosphere are more visible every day: recurring extreme weather phenomenon (like the hurricane bringing death and devastation in the Bahamas), droughts, forest wildfires and decreasing food yields are becoming a popular news feature.

According to the Internal Displacement Monitoring Centre, since 2008, 26.4 million people have been displaced by floods, droughts, windstorms, and other extreme weather events. The latest research on climate change and its effects also suggests that those who face the harmful effects of a heating world are the poorest and most disadvantaged, who often do not contribute themselves to CO2 emissions or other ecologically unsustainable practices.
It is clear, then, that climate change is a multidimensional issue because it creates problems of environmental and social justice. Not only are major polluters (often developed countries) doing most of the harm to the planet, but those paying the heaviest consequences have the least means to mitigate the effects of climate change. Some of you participating in the marches might have already seen the slogan “system change not climate change” which is precisely a call to see the wider picture and understand the intersections between environmental, economic and social injustice.

We should look at climate change as part of a wider systemic issue with characteristics that tend to favour a selected few over the many. Indeed, aside from the calls to switch to more sustainable lifestyles and consumptions, leading researchers are also calling for re-thinking our economic model and prioritise well-being and ecology over never-ending growth and investments in a world with limited resources.

Unfortunately, there are no easy answers to the many injustices we face every day and that can make us feel powerless and impotent. No single individual can fix the status quo from one day to another, nor is dividing human actions into good or bad for the environment and the society always easy or desirable. Nonetheless, I think the suggestion from the 16-year old Greta Thunberg to inform ourselves about the facts of climate change and its devastating effects on ecosystems and humans, which hopefully will lead us to take individual and collective action, is a good starting point. The school strikes that started with Swedish teenage activist -and that now encompass different generations ranging from students to grandparents- are a powerful call to action for a political class which is seen as slow and ineffective in dealing with the climate crisis.

Eurodiaconia’s members are already answering this call by stepping up their efforts in the provision of housing, guidance, food and health care services to migrants and displaced people. As the number of environmental migrants seeking a better life in Europe is likely to increase in the future, the social work of our members will be more needed than ever. Our members do not only react to injustice but actively fight its root causes. This is why the Diaconal movements around the world are becoming more conscious of the effects of climate change on their work and are mobilising to encourage governments and other stakeholders to act before it is too late.

It is our role at Eurodiaconia to make sure policies at European level reflect changing migration patterns and are to the benefit of national social and health care providers responding to the new challenges posed by climate change. Ultimately, even if climate change may be altering the political status quo and agenda, it will not change our drive to fight for a just and equal Social Europe.

Have a good weekend,
Jonathan